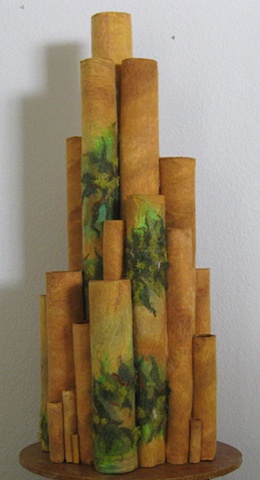 This piece features hand dyed fabric that was over-felted with wool roving. Strips from this material were made into hand sewn cylinders. The idea for this work was based on the 230 million year old rock formations of the Texas Palo Duro Canyon; the dyed fabric conveys the rock strata, and the tubes depict the erosion of the rocks.

Because the tubes vary in size with some being very large and grand, they are reminiscent of a church organ's pipes. And since the rocks on which the piece is based were formed over millions of years, the title “Rock of Ages” alludes to both.